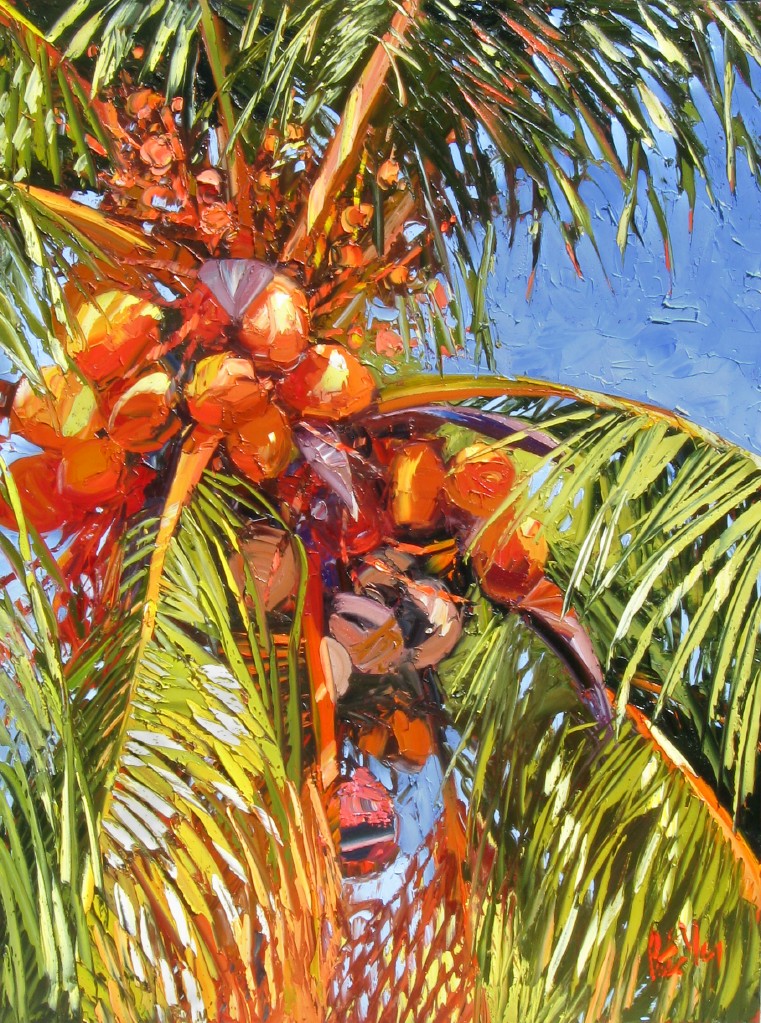 Peter Vey paints with a love of the everyday and a delight in the people and landscape of their immediate environs—impulses that stem directly from the great French Impressionists. Vey, who makes his home in Key West, Florida, and has been directly influenced by the tropical seductions of that magical place. As anyone who has visited there knows, Key West is the southernmost point in the Continental United States and a town of lovingly preserved enchantments that put it at a remove from the overbuilt and over-bulldozed development of the rest of the state. Aside from its abundant natural beauties—lush vegetation, white-sand beaches, sparkling waters, and breathtaking skies at all hours—the town boasts some of the most intriguing architecture anywhere in the form of the famous “Conch” houses built by early settlers. These are the pleasures of Key West living that Vey, a regional painter in the best sense of the term, celebrates in canvases that are as dazzling as his surroundings. What stayed with him was a love of the spontaneity that makes his realist work so strikingly fresh. Though he now uses primed instead of raw canvas and works with a palette knife, quick decisions are still essential to his process. Once it sets, the oil pigment can’t be pushed around further or overloaded with more color or the results will turn muddy. Vey uses only one tool, an artist’s mixing knife, but coaxes it to yield both the finest of lines and flat expanses of pure hue. He begins by making a loose sketch, to nail down the composition, and then builds up a picture area by area, much like the Renaissance fresco painters, who also needed to work quickly because their efforts would dry by the end of a day. His larger works are completed in the studio, sometimes using photographs as an aide-memoire, but he also works outdoors from the flatbed of his truck, making quick sketches that help him capture the light on the spot. Vey seems closest in spirit to both the Impressionists and the Post-Impressionists in his exuberant still lifes, and his floral paintings often approach the spirit of van Gogh without the neuroses or the angst. He also has a talent for painting coconuts and palm trees, imbuing those humble trees, which have become among the most clichéd emblems of tropical living, with a verve and drama that’s right up there with the best abstractions of our times. But his keen intelligence as a painter may be most in evidence in his pictures of Key West’s incomparable architecture. What makes a painting like Armory (the building where Vey has his studio) really sing is the careful attention to crisp lines, cool shadows, and just the right touches of bright color to give the building as much character as the portrait of a person. And notice how Turret with Shutters comes to life because of flashes of orange under the shutters and the hints of bright red in the palm trees; it’s also a tricky composition, nearly bisected by a tall skinny palm trunk, with the loosely handled vegetation on the right competing for your attention with the solid architecture on the left.
PrevNext