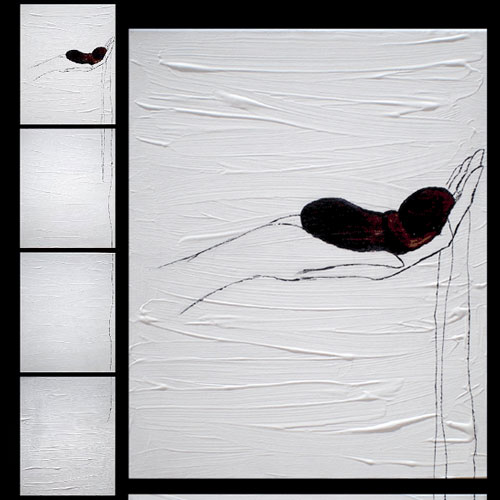 Exploiting the ironies of the human condition, my work mixes theories of contemporary avant-garde theatre including Bertolt Brecht and Artaud’s Theatre of Cruelty, with a longing toward social utopianism. I’m heavily influenced by the natural stressors that occur within various cultures (including digital), and the pressures they exude on everyday realities through the exploration of identities. Each piece consists of a dark whimsy and emotional entanglement as I explore themes such as death, religion, reproduction, vanity, greed and capitalism to help explore the underlying idea of “Creation as an act of Destruction”. Working in mixed mediums allows me to grab the richness and push the boundaries of the media in many different ways. I use alcohol washes, paper and other materials that lead to an aging process of the piece itself, an interaction that transcends the basic momentary viewer/piece relationship and allows for the piece to grow and develop over time. Lines play an important part of many pieces as well, not simply as a means to convey an image, but as a manifestation of the Greek idea of Moirae. Shell Albury was born December 11, 1982 in Pittsburgh, PA. Growing up outside of the Steel City, she skipped school to sit through Humanities courses at the local college. She studied theatre and writing during grade school. She later went on to study digital culture studies at Juniata College and attended an intensive at Middlebury College. She began her corporate addiction as art director at a publishing house and went on to do freelance marketing and design for print and web. Eight years later she threw it all in a box, lit it on fire and walked away. Now she lives in Florida.
PrevNext